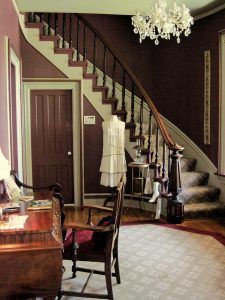 The Octagon House was built in 1857 by James Lawther, a 25-year-old Irish pioneer who sought his fortune in Red Wing when it was still a small river settlement. It is reported that Mr. Lawther adopted the octagonal design for the house because he believed it made the most economical use of space and also fostered the health and harmony of its inhabitants. In 1872 a dining room, kitchen and second floor bedroom suite for the maid and cook were added, along with a carriage house. The dining room was originally at the front of the house with the kitchen in the basement. Listed on the National Register of Historic Places, the Octagon House is located on what has been called “the most architecturally significant intersection in Minnesota,” joined by the E.S. Hoyt House, a Prairie School style home, and the Philander Spraque House, a French Second Empire style home.

The home was purchased by its current owner in August of 2007. Renovation of the interior of the carriage house began in February 2008 with its completion in late summer of the following year. The carriage house first floor interior renovations included dividing a large space into a room-sized storage area and single car garage, restoring the wood flooring, painting and adding vintage and period reproduction lighting. The second floor space underwent a complete renovation. The space was divided into a customized sewing & crafting studio, a “gathering” room and a bathroom.

The exterior trim and porch of the home was painted in the summer of 2008 when extensive work was also begun on the landscaping. Work on the grounds stretched out over the next six years, culminating in the gardens being featured on the Red Wing Arts Association Garden Tour in the summer of 2014.

In May 2009, the current owner was awarded a Heritage Preservation Award of Merit by the Red Wing Heritage Preservation Commission. The award was presented for the interior rehabilitation of the Carriage House and exterior painting of the Octagon House. Over its history, the Octagon House has served as a family home, nursing home and antique shop until its conversion in 1999-2000 to a Bed & Breakfast. Today it continues to operate as a B&B with special emphasis as a place for workshops, group gatherings, special events, and individual and group retreats.